Did you know that Sir Bradley Wiggins, Sir Mo Farah and I-thought-he-was-a-sir Chris Froome all suffer from asthma? As do a number of other succesful sports persons accused of using performance-enhancing drugs?  What I call ‘investigative linguistics’ led me down this particularly rabbit hole. My investigative linguistic approach examines texts for ‘points of interest’ (POIs). It uses deception detection tools on communications with unknown veracity in order to automatically identify POIs. One benefit is that you can approach a topic without any prior knowledge or biases and quickly find avenues that are objectively worth exploring.

After analysing the known deceptions of Lance Armstrong (see previous blog), I collected a bunch of statements made by sports people admitting or denying their use of perfomance-enhancing drugs. Based on currently available evidence these statements were divided into three categories: a) false denials, b) true confessions and c) presumed-to-be-true denials (see my Stanford Decepticon 2017 presentation for full details). For the ‘true’ denials category, I picked five recent high-profile cases: two relating to the cycling controversy around Sir Bradley, Sir David Brailsford and Team Sky (video explainer), and three connected to the controversy around the infamous athletics coach Alberto Salazar and his Nike Oregon Project which engulfed Sir Mo Farah, the Canadian Cameron Levins and, indirectly, Paula Radcliffe MBE.

It was a surprise to me that each of the interviews (graphed below) mentions asthma and related issues. If I had done some prior research I would have realised that the provision and use of asthma medication during and around major sport events was a key issue in sports doping. Still, it shows that deception detection techniques can be used for exploration i.e. to find the ‘points of interest’ worthy of further investigation. Furthermore, a ‘naive’ approach helps to avoid unconscious bias affecting the analysis

In Bradley Wiggins’ Guardian interview (given to counter suggestions of illegal doping during the 2012 Tour de France), the analysis highlights inconsistencies in Wiggins’ stance towards his asthma allergy:

[14] I was paranoid about making excuses: “Ah, my allergies have kicked in.” I’d learned to live with this thing. It wasn’t something I was going to shout from the rooftops and use as an excuse and say, “my allergies have started off again”. That’s convenient isn’t it Brad, your allergies started when you got dropped.

[17] I didn’t mention it in the book. I’d come off a season of … I’d won everything that year. When I was writing the book I wasn’t sat there thinking, “I’d better bring my allergies up”. I was flying on cloud nine after dominating the sport all year. It wasn’t something that I brought to mind.

In these two extracts, asthma is simultaneously a big deal and a non-issue for Wiggins. While this does not in any way confirm deception or guilt, it does indicate a defensive stance that is worth investigating. This can be contrasted with Mo Farah’s discussion of his own asthma:

[4] “This picture has been painted of me. It’s not right. I am 100% clean. I love what I do. I want to continue winning medals. But I want people to know that I am 100%, I am not on any drugs, I am not on thyroids, I am not on any other medication. The only medication that I am on, I am on asthma and I have had that since I was a child. That’s just a normal use. I am on TUE [therapeutic use exemption] where you have … it’s just the normal stuff. And that’s it.” – Sky Sports interview, 2015

In contrast to Wiggins, Mo Farah volunteers information in a non-defensive fashion about his asthma and use of Therapeutic Use Exemptions (TUEs – a doctor’s note and prescription). Canadian runner Cameron Levins’ response to questions about his use of prescription drugs registers as more ‘interesting’ than Farah’s although not as high as Wiggins:

Levins: I have some medication I take for my asthma, but that is something that is wrong with me. I’m asthmatic.

Interviewer: Was that before you came on with the (Nike Oregon) Project?

Levins later goes on to explain that “adult onset asthma is pretty common”. Obviously, having asthma since childhood is easier to defend which may explain the higher ‘interestingness’ score of Levins response compared to Farah.

In a 2016 interview with Sky Sports news David Brailsford, director of Team Sky (whose riders included Bradley Wiggins and Chris Froome), offered the following highly ‘interesting’ reply when asked about his team’s covert use of Therapeutic Use Exemptions to obtain otherwise prohibited drugs:

[5] We’ve reviewed this over the years as we’ve moved forward. We have changed our policy, we’ve changed the way we do it, and in the future going forward, I think we’re going to take the next step, which has been debated on a wider basis across the whole of the TUE process, and look at having the consent of the riders to make all TUEs transparent

In this segment, Brailsford tries draw a line under anything that may have occurred in the past, using many words related to looking to the future. In no way presuming anything illegal on Brailsford or Team Sky’s part, previous policy would clearly be a ‘point of interest’.

So, this analysis suggests that cyclists use of asthma medication is more ‘interesting’ than that of athletes. (In Farah’s interview, the analysis flags his comments about missed drug tests rather than specific doping allegations.) Understanding the reasons for this can then provide a focus for further investigation. As Chris Froome’s recent successful appeal shows, the asthma issue may be due to faulty regulations based on models with a tendency to generate ‘false positives’ – itself a form of deviance if not deception. 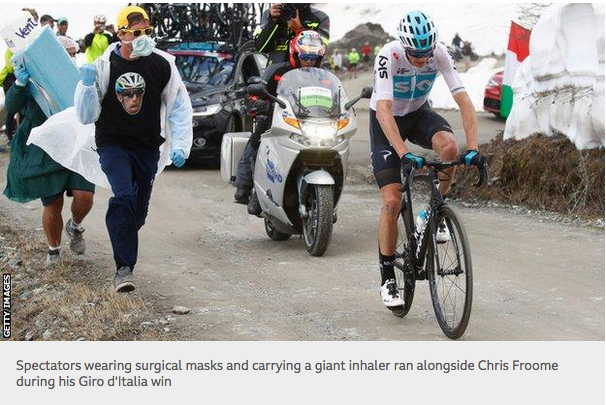 For this naive analyst, investigative linguistics revealed an important connection between asthma and sports doping that is clearly ‘interesting’. Application of the same techniques to the domains of business, politics and finance will definitely be interesting…

4 thoughts on “The case of the asthmatic cyclists: deception detection as investigative linguistics”

Essay mills, contract cheating, and any form of commercial essay wrtiting will soon be illegal in the UK as part of the Skills and Post-16 Education bill is currently in the House of Lords and set to become law next year. It is currently a lucrative business for some; the owner of the largest British…

‘Contract Cheating’ (a term first coined by Clarke and Lancaster in a 2006 paper) is basically ghostwriting in academic contexts. Students outsource their academic work to commercial essay writers who may be working for an ‘essay mill’ or freelance through a website like Fiverr. The mass production, e-commerce model and use of gig workers means…

Donald Trump’s passing relationship with the truth has been widely documented by numerous factcheckers. However, the Outliar approach analyses deception – i.e. the intention to create false belief – rather than checking facts and so takes into account how deceivers piggyback their lies on truth. Which begs the question: what are the truths that Donald…